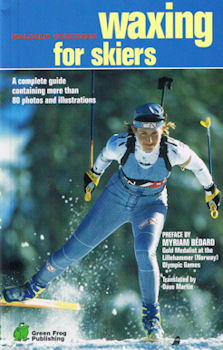 A keen outdoors enthusiast, MALCOLM CORCORAN holds a bachelor of arts degree from Université Laval, a bachelor’s degree in physical education from the University of Moncton and a masters degree in sports administration from the University of Ottawa. He has produced several audiovisual documents on cross-country skiing and is the owner of Sport Échange Outaouais, a store located in Hull, Québec.
His passion for cross-country skiing brought him to the realization that little had been written on the topic of waxing and opinions differed greatly on the subject.
Using his own experience gained from numerous outings and marathons and based on his discussions with experienced skiers, Malcolm Corcoran has summarized in this 2nd edition the latest cross-country waxing techniques.
At last, there is a complete guide on waxing, which includes more than 80 photos and illustrations.
– Synthetic skis: classic and skating
– Waxless and wooden skis
– Structuring the base
– Klisters and fluorocarbon waxes
– Grip and glider waxes
– Repairing and cleaning the base
– Waxing tables describing the waxes of various manufacturers
– Transporting and storing skis
– Testing cambers and the waxing pocket
PORTIONS OF THIS BOOK CAN ALSO BE APPLIED TO SNOWBOARDING AND DOWNHILL SKIING
EVERYTHING ON WAXING IS COVERED FOR SKIERS OF ALL LEVELS FROM BEGINNER TO ADVANCED